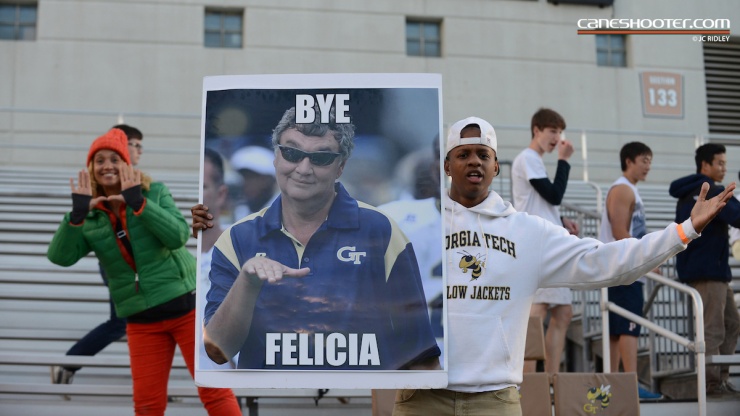 Last night in Atlanta, this Georgia Tech fan had no idea he was getting the ultimate photobomb until we told him to turn around. When he did he saw Angela Means-Kaaya, the mother of ‘Canes QB Brad Kaaya and the actress who played Felisha (the actual spelling) in the movie “Friday” back in 1995.

In the movie, Means-Kaaya’s character Felicia would come and ask Craig (one of the main characters) for random things like if she can borrow his car, or use his iron. One day she asked him for some money and he says “Bye, Felisha,” and after she refuses to leave he says it again with emphasis. The phrase has become a popular meme on the internet and a part of modern-day pop culture.

JC Ridley is the long-time team photographer for the Miami Hurricanes and Florida Atlantic Owls, with over 25 years of experience in the photography industry. His images have been published in numerous publications, including Sports Illustrated. JC even spent seven seasons as a contributing photographer for the National Football League. View all posts by JC Ridley