Recently I was challenged in one of those viral Facebook posts to post seven of my best nature photos. Since I can’t quite ever put down a camera, I found waterfall and landscape photography is my release from the daily grind. Besides, why not take home a prize after a rewarding hike? After looking at my archive, I chose these seven images for the challenge.

I led off with South Falls, in Silver Falls State Park near Silverton, Oregon. The park is by far my favorite state park, and is one of my favorite places on Earth. The park has ten significant waterfalls, which can be accessed by the appropriately named Trail of Ten Falls.

Founded in 1888, the small lumber town of Silver Falls City sat atop the South Falls, and as the land was cleared, a local entrepreneur sold admission to the falls area, with attractions including pushing cars over the falls and hosting a stunt with a daredevil riding over the falls in a canoe.

In 1935 President Franklin D. Roosevelt announced that the Silver Falls area would be turned into a Recreational Demonstration Area. Private land that had been logged was purchased, and workers in the Civilian Conservation Corps were employed to develop park facilities, including the historic South Falls Lodge, completed in the late 1930s. It was used as a restaurant from 1946 until the late 1950s and was listed on the National Register of Historic Places as the Silver Falls State Park Concession Building Area in 1983. Today, it serves as the park gift shop.

In January 2008, during the 2008 supplemental legislative session, Fred Girod of the Oregon House of Representatives sought federal designation of the area as a national park via a house joint memorial to the United States Congress, but the bill died in committee.

Garrapata State Park, located near Carmel_by-The-Sea, California, has 2 miles of beachfront, with coastal hiking and a 50-foot climb to a view of the Pacific Ocean. California sea lions, harbor seals and sea otters frequent the coastal waters while gray whales pass close by during their yearly migration.

The area hosted the Ohlone and Rumsien tribes in the past. In the early 20th century it was the Ezequiel Soberanes Rancho, a cattle and sheep ranch. The ranch was later sold to the Doud family, who had a cattle ranch on the property. Features within Garrapata State Park still bear the names of these families. 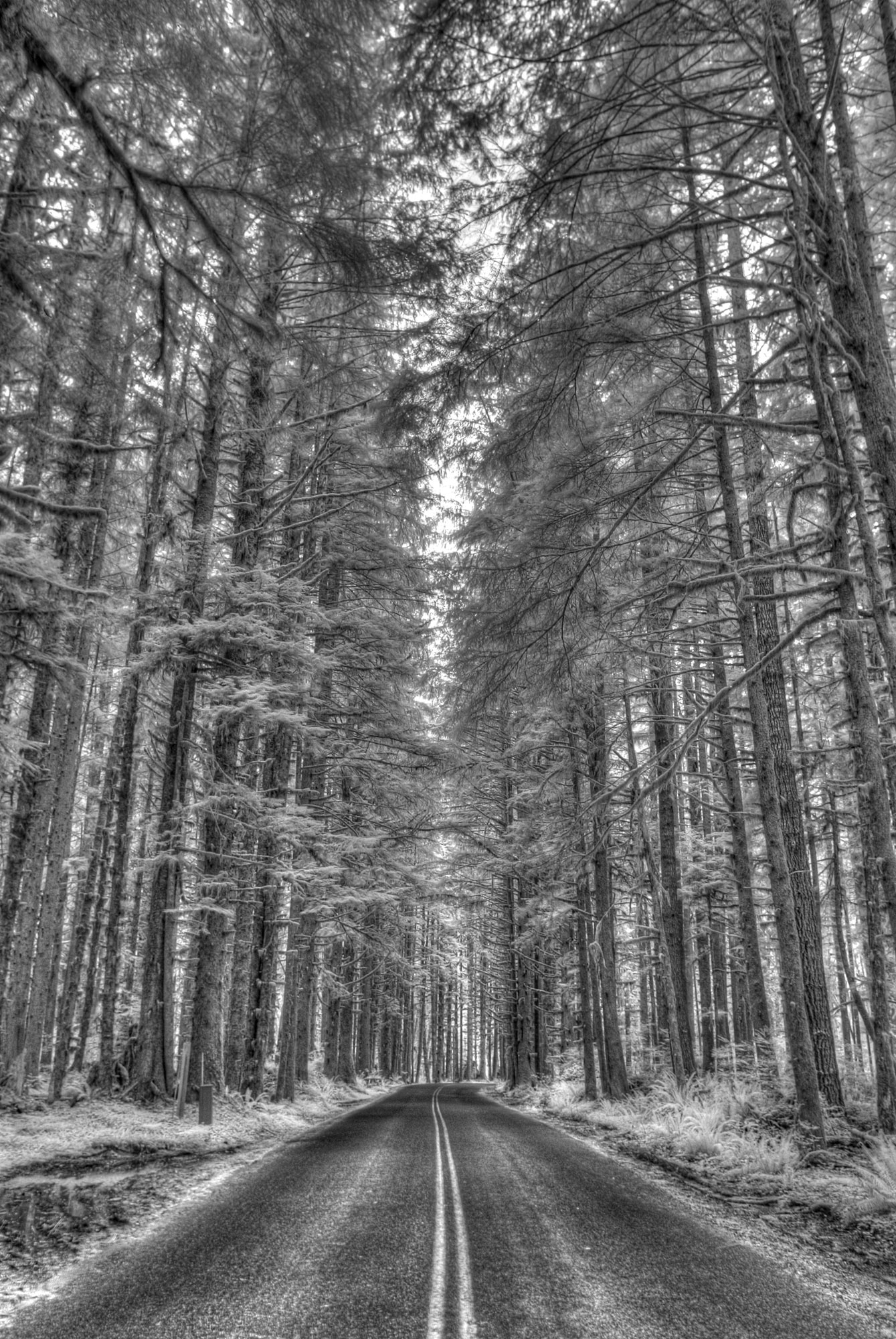 This infrared shot is of the spruce-lined Upper Hoh Road, leading to the Hoh Rainforest within Olympic National Park near Forks, Washington.

The Hoh River valley was formed thousands of years ago by glaciers. Between the park boundary and the Pacific Ocean, much of the forest has been logged within the last century, although many pockets of forest remain.

The Hoh Rainforest is one of the largest temperate rainforests in the United States, resulting in a lush, green canopy of both coniferous and deciduous species. Mosses and ferns that blanket the surfaces add another dimension to the enchantment of the rainforest.

Moisture-laden air from the Pacific brings an average of 140 inches of annual rainfall to the Hoh Valley, in addition to condensed mist that contributes another 30 inches annually.

The Hoh Rain Forest is located in the stretch of the Pacific Northwest rainforest which once spanned the Pacific coast from southeastern Alaska to the central coast of California. The Hoh is one of the park’s most popular destinations. 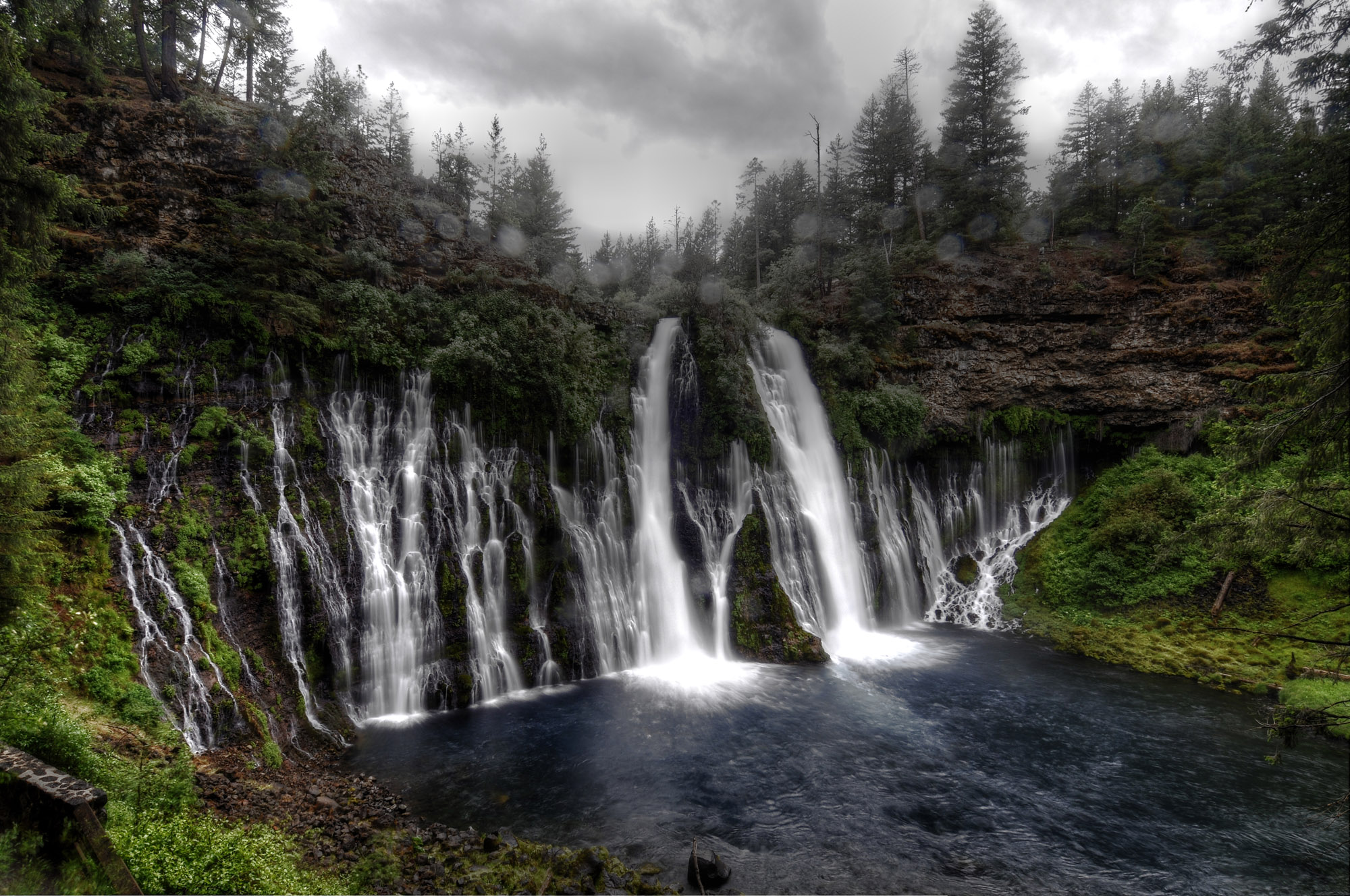 Inside of McArthur-Burney State Park, near Burney, California, is the park’s centerpiece, the 129-foot Burney Falls.

The park’s landscape was created by volcanic activity as well as erosion from weather and streams. This volcanic region is surrounded by mountain peaks and is covered by black volcanic rock, or basalt. Created over a million years ago, the layered, porous basalt retains rainwater and snow melt, which forms a large underground reservoir. Additional water comes from springs, joining to create a mist-filled basin. Burney Creek originates from the park’s underground springs and flows to Lake Britton, getting larger along the way to the majestic falls.

Within the park, the water emerges as springs at and above Burney Falls, where it flows at 100 million gallons every day.

Burney Falls was named after pioneer settler Samuel Burney who lived in the area in the 1850s. The McArthurs were pioneer settlers who arrived in the late 1800s. Descendants were responsible for saving the waterfall and nearby land from development. They bought the property and gave it to the state as a gift in the 1920s.

This shot is of sunrise on Park Boulevard in Joshua Tree National Park.

The name Joshua tree was given by a group of Mormon settlers who crossed the Mojave Desert in the mid-19th century. This monocotyledonous tree is native to southwestern North America in the states of California, Arizona, Utah, and Nevada, where it is confined mostly to the Mojave Desert between 1,300-foot and 5,900-foot elevation. The tree thrives in the open grasslands of Queen Valley and Lost Horse Valley in Joshua Tree National Park. A dense Joshua tree forest also exists in Mojave National Preserve, and west of Death Valley National Park, where U2’s iconic Joshua Tree once lived.

In the late 1800s cattlemen came to the desert. They built dams to create water tanks. They were followed by miners who tunneled the earth in search of gold. They are gone now, but they left behind the Lost Horse and Desert Queen mines and the Keys Ranch. In the 1930s homesteaders came seeking free land and the chance to start new lives.

Declared a National Park in 1994 when Congress passed the California Desert Protection Act, it had previously been a National Monument since 1936.

A large part of the park, some 429,690 acres, is a designated wilderness area. Straddling the San Bernardino County/Riverside County border, the park includes parts of two deserts, each an ecosystem whose characteristics are determined primarily by elevation: the higher Mojave Desert and lower Colorado Desert. The Little San Bernardino Mountains run through the southwest edge of the park.

Fallasburg Bridge is a 100 foot span Brown truss covered bridge, erected in 1871 near Lowell, Michigan. It is listed on the National Register of Historic Places, and is one of only three Michigan covered bridges open to vehicle traffic.

Around 1840 the first of several wooden bridges was placed across the Flat River, but all fell victim to high water and massive spring ice jams. Bridge builder Jared N. Bresee of Ada was given a contract in 1871 to build the present structure. Completed at a cost of $1500, the bridge has lattice work trusses made of white pine timbers. As with all covered bridges, the roof and siding protect the timbers from rot. The original wooden abutments were replaced by lower concrete structures in 1905. Additional repairs in 1905 and 1945 have kept the Fallasburg Bridge safe for traffic for more than 125 years. 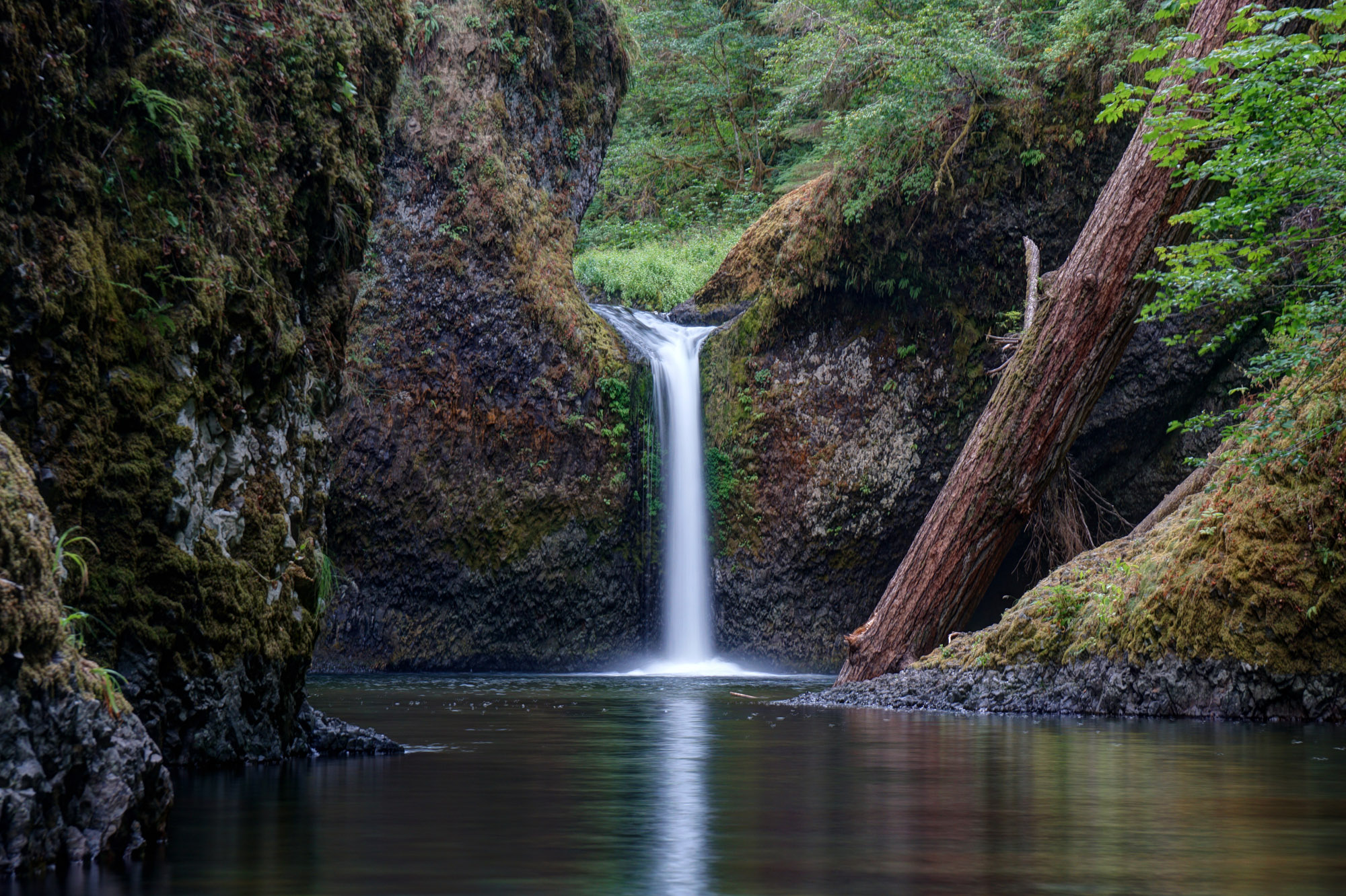 I close with Punch Bowl Falls, along the Eagle Creek Trail in the Columbia River Gorge National Scenic Area near Hood River, Oregon.

Although the falls is only 35 feet tall and 10 feet wide, it is one of the most photographed falls in the country, appearing on countless calendars, books, and even the back of the Styx II album cover in the 1970’s. As Eagle Creek cuts through a narrow channel and shoots powerfully into a large bowl that resembles a punchbowl, this waterfall was entirely responsible for the waterfall classification type of punchbowl.

The falls can be reached about two miles along the epic Eagle Creek Trail, a 14 mile one way trek to Wathum Lake that was constructed in 1915 with pick-axes and shovels into towering basalt walls and cliffs. Several waterfalls adorn the trail, including the unique Tunnel Falls, where the Eagle Creek Trail passes through a tunnel carved behind the falls.